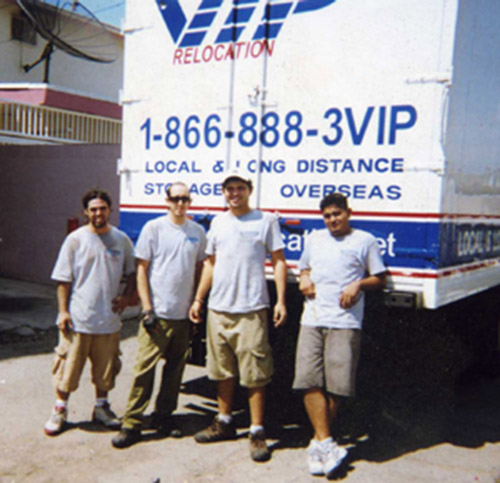 If you’ve moved in the last few years, or if you are planning a move now, you already know it’s a lot of work. Imagine doing that work 5-7 days a week, often with two moves a day, and you might have an idea of what it’s like to be a professional mover.

While professional mover doesn’t crack the list of most dangerous jobs, truck driver is the 7th most dangerous job in the United States, mostly because of traffic. Add the challenges of Southern California traffic to that, and you can see why moving is stressful.

Perhaps it’s not one of the most dangerous jobs, but moving is extremely physically demanding; you already knew that, right? Movers carry 1,000s of pounds every single day. While many things can be moved on dollies, many of the biggest and bulkiest items can’t, especially if a move involves stairs.

What is the poem about mail carriers? Neither rain, nor sleet, nor dead of night, or something like that? While yes, that’s absolutely true about mail carriers, it could also have been written about movers. They work in blazing heat and freezing cold (as if it gets freezing cold in Southern California) Short of something catastrophic, like a major earthquake, a hurricane, a blizzard, or a fire, your movers will be there.

Don’t get us wrong. VIP Relocation has some of the best customers in the world, but moving day is stressful, and sometimes, the stress spills over onto the movers. We totally get it. It’s okay, but calmness and patience are a huge part of the job.

The Best Parts of the Job

Most movers will tell you they love their jobs, for several reasons.

Yes, anxious customers sometimes make their jobs harder, but they are also, hands down, the best part of the job. Most movers are extroverts, and love meeting new people, and occasionally, making new friends.

Often, when you see the word “challenges” in a post like this, it’s negative. Movers, though, love challenges. There’s nothing more satisfying than figuring out a way to make something that absolutely won’t fit, fit.

Moving is never routine. Every day is different and exciting.

Not only can movers leave their day behind when they get home, they sleep like babies. Who wouldn’t after 8-12 hours of heavy lifting?